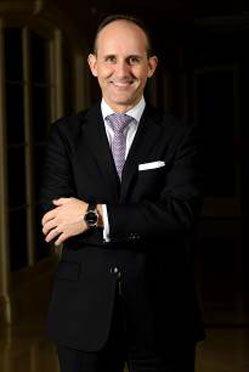 XI’AN, CHINA – APRIL 2018 – The Ritz-Carlton, Xi’an is pleased to announce the new appointment of Mr. Patrick Weder as General Manager.

Mr. Weder, a native Swiss citizen graduated from Ecole hôtelière de Lausanne, speaks 5 languages, has a wealth of hospitality and management experience in his career beginning in Switzerland 22 years ago.

Since being a Food and Beverage professional of The Ritz-Carlton, Cancun, Mr. Weder has worked with The Ritz-Carlton Hotels for 17 years holding various managerial positions across different properties in Dubai, Indonesia, Malaysia and Mainland China. He has also worked in Shanghai and Beijing gaining rich experience in the Chinese market. His most recent position was General Manager of The Ritz-Carlton, Beijing. Under his leadership, The Ritz-Carlton, Beijing received many outstanding awards and accolades, such as “Best Gathering Hub” by < Condé Nast Traveler> Gold List Awards, “Hot 25 Business Hotel in Asia” by Smart Travel Asia.com, “Best Hotel Campaign” by Sina.com, and was voted Top 2 hotel in China by <Condé Nast Traveler US > Readers’ Choice Top 20 Hotel Awards 2017. Mr. Weder was also recognized for “Best Leadership” by <Global Times> .

Mr. Weder brings a strong background in hotel management, food and beverage and brand integrity to his role, along with his dedication to luxury hospitality, extraordinary service standards and a natural graciousness that embodies the hallmarks of The Ritz-Carlton experience. Mr. Weder was appointed Advisory Board Member for Food & Beverage in Asia Pacific, selected as a pre-opening trainer and played in an important role for 9 Ritz-Carlton hotels including flagship properties in Berlin, Okinawa, Bali, Hong Kong and Macau. In his leisure, Mr. Weder enjoys spending time with family, travelling around the world and exploring different countries and cultures.

“Xi’an is a city with pleasant flair and rich cultural heritage,” says Mr. Weder. “We will look forward to opening The Ritz-Carlton in this market and delight guests with its legendary personal service.”

The Ritz-Carlton, Xi’an located in urban complex “The City By Zhongda International”, being developed by Zhongda Zhongfanxin Proprietary Company Ltd. Hotel is expected to open in 2019. In North West China, the city is one of China’s Four Ancient Capitals, home to 13 imperial Chinese dynasties, which today still serves as the capital of its province, Shaanxi.

With 285 guestrooms and suites, The Ritz-Carlton, Xi’an will be a modern icon paying tribute to its location as a new high tech hub in this historical city, curating North West China for the international traveler. With expansive event spaces including two ballrooms, two exceptional restaurants including Japanese and Cantonese dining, and an exciting new outpost of the sophisticated roof top bar, Flair, the property will be the new social hub in the city.

Modern Xi’an remains an eclectic city that befits its position at the crossroads of China. Ming-era city walls can be explored best by bicycle and its extensive Muslim Quarter is a warren of narrow lanes that can be compared to the bustle of a Middle Eastern souk with Chinese heritage. Endless temples and cultural relics dot the city and the surrounding countryside, while its rich culinary scene draws extensively from a melting pot of influences on the Silk Road.